The following is an article I authored for a women’s magazine. Unfortunately, the publication never quite got off the ground. I decided this piece needed to be shared, regardless.

Have you ever viewed a painting or a sculpture, heard a poem or read a story that awakened your senses? Made you feel passionate about a subject and perhaps initiated a personal catharsis in you?

Art possesses the ability to capture awareness, stimulate thought and ignite emotion. Usually, one cannot view an artistic creation without feeling a reaction toward it, be it positive or negative, compelling or indifferent. Although some artists claim that interpretation is up to the individual, most probably desire a specific reaction; they want you to see what they see, feel what they feel, according to the passion and earnestness of their created work.

With his sculptural series, “Goddess,” which showcases voluptuous, rotund women in enchanting poses, Adam Schultz hopes to inspire and influence a change in what qualifies as beautiful.

“Art is one of the most powerful ways to promote positive body image,” he states. “When people see these body types represented in a sensual way, rendered in the timeless medium of bronze, they are forced to reexamine their personal opinions of others – and of themselves.”

I first met Adam at a gallery in Evergreen, Colorado, where he was demonstrating part of his sculpting process using oil-based clay. Although we had been in correspondence prior to that evening, speaking with him in person and witnessing his work-in-process was pivotal for me. As an appreciator of the arts, I am constantly inspired by the creativity of others, and Adam’s works speak to me on a very personal level, because 1.) I have the body type he molds, and 2.) We share the same passion about changing the narrowing views on beauty.

Having sculpted a wide range of artifacts for over 25 years – including animals, portraits, memorials and monuments for both private and corporate collections – Adam decided within the last decade to begin creating the figures he loves personally but rarely sees sculpturally. “I find the sensual curves of full-figured women inherently beautiful,” he tells me, a point which is made evident by the delightfully abundant “Goddess Series.”

Adam did not begin his artistic journey as a sculptor, however. In college, he chose drawing as his major and had dreams of becoming an illustrator. It wasn’t until he learned to sculpt that he realized his true passion. For 20 years, he worked at a foundry in Northern Colorado, recreating the styles and textures of many different artists in order to cast their works in bronze. It was during this time that he became an expert in every phase of the “lost wax” process and discovered his own style. To this day, he continues to take sculpture workshops and apprentice with some of the finest figure sculptors of our time. As he says, “I never stop honing my skills.”

So why the focus on full-figured body types?

“I see people feeling ugly their whole lives,” Adam reveals. “I see them hurting and mutilating their bodies to try and emulate Barbie dolls, and I wonder why unique, lovely and curvaceous body types aren’t perceived as beautiful also.”

When his two daughters were around the ages of four or five, both complained to Adam that they needed to lose weight, which determined him even further to play a role in changing perceptions and reversing the low self-esteem crisis pervading our population, particularly in women. 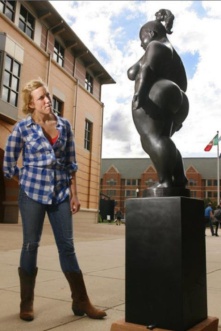 Although he realizes that not every person who views his sculptures will embrace his artistic intent, he remains committed to promoting positive body image. According to Adam, his biggest critics tend to be those individuals who have fallen into the “thin is in” rhetoric and who find the celebration of rotund bodies distasteful. Adam treats these negative moments as opportunities to educate and introduce a different opinion, as well as to perhaps change a misguided perception.

For the most part, the response to Adam’s “Goddess Series” has been overwhelmingly positive. And that is most pivotal.

“I’ve had women burst into tears after viewing my work,” he shares, “and thank me for helping them to see themselves – sometimes for the first time – as beautiful.”

Art can perform an integral role in drawing attention to a subject and affecting change. Although Adam Schultz realizes that not every person who views his sculptures will embrace his vision, he remains committed to promoting positive body image and making a difference through his abundant sculptural forms. 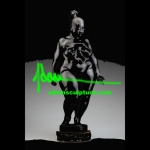 Filed under A Touch of Inspiration, Musings and Thoughts, Visual Delights

The Art of Adam Schultz

At a small mountain-town holiday festival this past weekend, I had the pleasure of meeting acclaimed sculptor, Adam Schultz, who was offering a demonstration on his latest piece-in-process, ‘Octopus Princess’, at a local gallery there.  After having shared online correspondence only, it was nice for he and I to finally meet face-to-face and discuss life, love, art and our mutual zaftig philosophy. 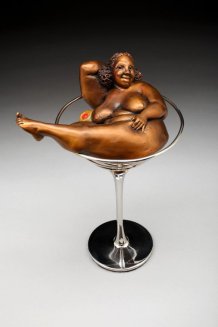 I first became familiar with Adam’s bronze Goddess Series earlier this year, when I visited Stoneheart Gallery for a group show titled “Every Body’s Beautiful,” showcasing the diversity of body types through various art mediums. I immediately fell in love with ‘Olive’, whose smile, relaxed pose and candid demeanor quickly captured my heart.

At the time, I appreciated ‘Olive’ to be zaftig whimsy at its finest, however, the Enchanted Zaftig concept had not fully formed in my mind yet.

It wasn’t until many months later that I became re-aquainted with Adam’s work, when he joined the Enchanted Zaftig Facebook page. Sifting through his photos, I was delighted to see that he was the creator of ‘Olive’ ~ and countless other pieces which are equally resplendent in their voluptuous beauty.

Adam and I share a sympatico philosophy: uplift the zaftig form while bringing awareness to the world.

“Artwork is one of the best ways I know of to help raise consciousness and change the world.

I figure that the more size-positive images of people we get out there, the sooner people will start to realize that there is more beauty to be seen in people everywhere than the one, narrow definition of ‘beautiful’ the media has been feeding us the past 80 years or so.” 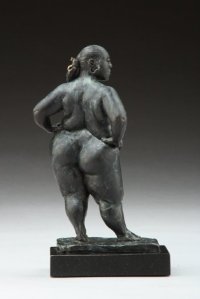 “My dream is to install a large-scale, celebratory and beautifully abundant sculpture, wrought in bronze, in every country on the planet.”

I would love to see that dream come to fruition. Art really does carry the power to change people’s perceptions.  Wouldn’t it be great to have the message be a positive one?

Adam’s latest creation, ‘Octopus Princess, will take a bit of a turn from his usual ladies in the  Goddess collection; she will encompass both beauty and a sense of eeriness ~ a woman-beast, shrouded in mystery and sensuality. I wish I had taken a photo of her backside, because the octopus’ eyes are cleverly planted on her curvaceous derriere. I look forward to seeing the final piece once it has been cast.

Be sure to check back, or visit the Enchanted Zaftig Facebook page, to see the sculpture when it is complete.

You can view other works by Adam, including non-zaftig bronze and stone sculptures, by visiting his website:

Also be sure to visit:

Filed under A Touch of Inspiration, Visual Delights